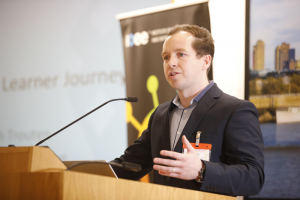 Gary Rockcliffe has always had the desire and hunger that an entrepreneur needs to power them to success. He’s had a rich and varied work life, setting up various business ideas and projects over the years, but one bad decision resulted in Gary having to serve a 16.5 month-long prison sentence, being released in 2017. However, Gary’s drive and ambition saw him throw himself into studying whilst inside, where he acquired three SFEDI qualifications, and he is now excelling in his professional life and beginning a brand career as a motivational speaker too. Here, we find out more about Gary’s inspiring story.

Gary Rockcliffe is a self-confessed dreamer with a boundless enthusiasm and ambition for getting the most out of life. From an early age, he knew he wanted to achieve big things, even if it meant going against the grain and enduring the judgement of other people along the way. Gary says:

“I grew up on a rough council estate in Leeds and I was very close to getting caught up in the negative ‘dole culture’ I was surrounded by, but I wanted to break away from that. I knew that you don’t just have to go along with things, you can choose to break the mould, but it wasn’t easy and people would give you grief for wanting to do something with your life. I got my first job while I was still at school, working as a cleaner when I was 15-16. I made £70 every two weeks, and at that age I felt like a millionaire! I’d be in school in the week and then clean on a Tuesday and Thursday night. I think I always had a taste for money, but I was never afraid of hard work, and I think pushing myself to work back then was probably the first sign of having an entrepreneurial streak.”

Gary worked in printing for a number of years, but that creative entrepreneurial streak meant that he always had business ideas simmering under the surface, setting up side projects and businesses outside of work to generate extra income and feed his hunger for success. However, his entrepreneurial attitude was often deemed a negative instead of a positive, posing challenges along the way:

“I found myself in really difficult situations, in particular losing my job because of it. I was trying to set up my own business on the side of my day job and my employer found out and basically sacked me on the spot. I was a few weeks from moving house with a second baby on the way, but I refused to give up. I put on my suit and went out looking for work the next day, and that’s ultimately how I ended up working in recruitment.”

Gary now works as a Divisional Manager for The Works Recruitment, a successful recruitment agency in Yorkshire, and has been with them since 2015. However, in 2014 he made some ‘bad decisions’ with one of his money-making side projects, and everything changed for him. Gary says:

“I’d never been in trouble with the law before, but I basically got greedy and impatient and decided to get involved in growing cannabis. I remember the moment where I made the decision, in my front room, justifying it to myself that I could use the money to invest in a legitimate business and support my family, but it was the wrong decision – one single stupid decision that I never even made any money from anyway, but I made it, and there was no going back.”

Gary was arrested in 2014 and sentenced in November 2015 to three years in prison, for which he served 16.5 months before being released in March 2017. Whilst the experience could understandably drive somebody’s downfall, for Gary it was quite the opposite. His ambition and determination to make something of himself were his tools for getting through his time inside, and he now cites his time in prison as responsible for feeling ‘reincarnated’. Gary says:

“It was hard; believe me, it was hard. For the first nine days I completely lost myself and my way and didn’t know who I was, but on day nine I changed. I decided that I had to be myself, no matter what. Some people didn’t like that, but other people respected me for it. it was the only way I was going to survive. I’d always been spinning plates on the outside, juggling different businesses and working under pressure, so I decided I needed to create that environment on the inside too. I’d be at the gym seven days a week and reading constantly – about 55 books whilst I was in there, most of them read more than once to really absorb everything. I was doing cell workouts, yoga, meditation, and started studying and making plans for when I got back out inside the outside world.”

Gary got funding through the Prisoners’ Education Trust and undertook three SFEDI qualifications: A Level 1 Award in Understanding Enterprise, a Level 2 Diploma in Enterprise and Entrepreneurship, and Creating and Starting a Digital Business. The knowledge he gained through his studies inspired and assisted him in designing business plans that he could use to achieve success upon his release. His dedication and determination was noticed, and Gary even progressed to officially mentoring the Business class in prison, as well as informally mentoring other inmates, and both of these experiences helped to guide Gary to his current pursuit of being an entrepreneurial motivator and life coach. Gary says:

“Studying for the SFEDI qualifications saved me in a way - you can get caught up in so much in there, so I did everything I could do stay focused and positive and just keep myself to myself. It was frustrating at first, my GCSE records weren’t available and so I had to do English and Maths courses for eight weeks with people who couldn’t do 1 + 1 before I could start studying in-depth, but then I threw myself into it. At one point you would have come into my cell and it was just filled with paper and diagrams and books and business plans and ideas. Since my release, I’ve done something with them all, but one in particular is thriving and I’m in the process of securing funding at the moment. I ended up mentoring the Business class, but I was doing informal mentoring off my own back too – lending out books to people and having positive conversations. I really believed, and still do, that anything is possible and you can achieve anything if you put your mind to it.”

Upon his release in 2017, Gary went back to work for The Works Recruitment, and has thrived in this last year – he’s already had two promotions, won two awards, and is the company’s highest biller. It’s testament to Gary’s strength of character and determination that he sees his time in prison as a positive experience that will serve him going forward with the rest of his life:

“When people ask me about my time in prison now, I tell them I wouldn’t change it. I feel almost reincarnated by the experience, and I’m motivated and inspired to make a difference, and help other people achieve their goals. You need the power of positivity, as negativity pulls you down, especially in prison, but I’ve learnt that attitude is everything. You could have every qualification in the world, but you won’t get anywhere without desire, discipline, and harnessing your entrepreneurial side.”

At the beginning of March, Gary attended SFEDI and the IOEE’s Unlocking Potential event at Westminster, taking to the stage to share his story. Gary says:

“It was an amazing experience, and being able to share my story and the things I’ve learned is something I want to do more of, giving motivational talks and pushing people out of their comfort zone. I learnt about something inside called ‘the unwavering faith’, and I channel this every day, reminding myself in the morning about the importance of believing in yourself and your journey. I want to inspire other people to do this too, to empower people to make positive changes, because I know first-hand what it means to turn your life around.”

You can follow Gary’s journey on his blog, Memoirs of a Lawbreaker: https://offendermemoirs.wordpress.com/