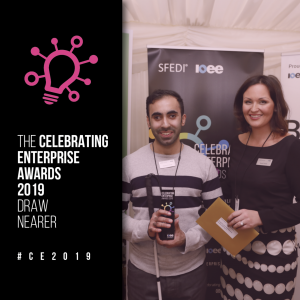 The Celebrating Enterprise Awards 2019 is fast approaching so we're taking a look back over last years' winners in anticipation of the awards which will take place at the House of Lords on the 3rd October.

One of the most notable receivers of an award last year was the Enterprising Learner of the Year, Haydar Ali-Ismail.

Ali was diagnosed with a sight condition called retinitis pigmentosa from birth and by the time he was nine his condition severely affected his vision eventually leaving him blind. Learning about his environment without sight was a difficult challenge for him. After securing a place at Manchester Metropolitan University he wanted to do more as a role model for the visually impaired community. In the final year of his degree, he saw how entrepreneurship could be a vehicle to support the visually impaired community he wanted to help.

A significant enabler for Ali was his walking stick, however mislaying the stick led to a high degree of anxiety and loss of confidence. Ali with fellow students developed a cane finder device linked to a smartphone that is of particular interest in the visually impaired community. Ali is no ordinary student, his dedication and thirst for knowledge is second to none. He has undertaken a range of extra-curricular activities to widen his knowledge and continues to learn as he completes the final year of his degree programme.

You can check out our whole shortlist for the awards here: http://bit.ly/2kcYQFL

Keep up to date with the Celebrating Enterprise Awards 2019 here: http://bit.ly/2ltiJs4