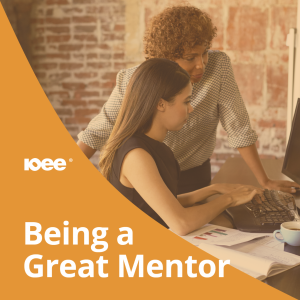 Every apprentice needs a workplace mentor - someone there every day who understands and supports their learning and development needs, and the concerns that go along with settling into a new role.So here's a few tips on how to look after your apprentice successfully.

It’s important not to underestimate the time required to help even the most self-sufficient apprentices prepare for their qualification. Don't let your manager tell you it's something you can do on the side. You need to argue for a recognised amount of your time to be spent on it to do it justice.

In addition to their other ‘hats’, workplace mentors should be apprenticeship evangelists, presenting apprenticeships as a positive force to colleagues and stakeholders. Any success story you have in your organisation, share it across the wider organisation. The general awareness of apprenticeships isn't high enough and the role of the mentor isn’t properly understood. Each time someone goes through that learning curve with their first cohort, they should be radiating that information to as many people as possible so others can learn without making the same mistakes.

If you’re the first person apprentices really know and trust within their organisation, they’re more likely to come to you than anyone else through the first months of their new role. It’s a good idea to make yourself as accessible as possible during this period.

Coming into the workplace for the first time can be really daunting and they can be quite easily overwhelmed by all the new stuff they've got to learn. Start by offering them lots of support before stepping back as they grow in confidence and ability.

Underestimate them at your peril

Employers can be nervous about letting apprentices take on responsibilities or key pieces of work. But apprentices who aren’t given this opportunity are less likely to pass their assessment or make good employees in the future. The knowledge, skills and behaviours required for most apprenticeships are best demonstrated in a real-world context, even in the earliest stages of learning.

The best performance management tool is a quick check of apprentices’ faces each day. A big measure of success is how happy the apprentices are. You can tell that in the morning. Have they come into work dreading what they're about to be doing, or are they fired up before you start talking to them?

The reward is much quicker than in similar mentoring roles for more experienced professionals. If somebody comes to you saying "I've got doubts about what I should be doing, I don't understand this bit of software", and you're able to talk to them, reassure them, influence them, persuade them by reminding them of their end goal and get them back on track, then that's a fantastic feeling. And that can all happen in a matter of weeks, whereas seeing that change in attitude in an experienced person would take months!