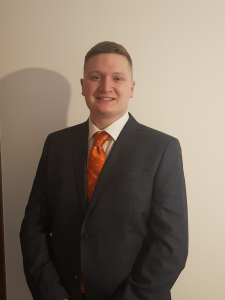 Mathew Burbidge is the creator of Wandering Brian; a comic book designed to offer dyslexic readers material to help improve their reading skills, without being patronising - a problem Mathew encountered as a dyslexic person himself. Mathew was paired up with mentor Keith Willett, a Relationship Director in Manufacturing for Lloyds Banking Group (LBG). This month we chatted to Mathew and Keith about how confidence is key, and how the merits of mentoring goes both ways.

Mathew, 25, is studying for his Master’s Degree in Creative Futures at Staffordshire University, where he is due to graduate this year, and it is here that he began his work on Wandering Brian. However, the inspiration for this dyslexia-friendly comic books goes all the way back to Mathew’s childhood - as a dyslexic person himself, he often found the reading material he was given to be somewhat patronising. Mathew says:

“Being dyslexic at school was the catalyst for this whole idea. You’d be given really inappropriate material for your age, such as when I was in Year 7 and I would be given books that were for five year-olds. Obviously, this didn’t capture my imagination at all, and it was also at a time when Harry Potter had just come out and I wasn’t able to read it, and these things made me feel like I was left out and couldn’t be a part of what everyone else was reading.

“Wandering Brian began as a university project, but through my research and my own experience it quickly became evident that this was something that needed to be in the market, and so I turned it into a business. It’s an exciting story for the right age group, and it is tailored to the needs of dyslexic readers.”

Last year Mathew was matched up with Keith. The two have phone meetings every six weeks as well as regularly emailing each other, and one of the key areas that Keith has helped Mathew with the most is his confidence, as Mathew explains:

“Personally, I’ve grown a lot over the last year. For example, I wouldn’t have been able to hold this conversation properly this time a year ago. I was diagnosed with Tourette’s syndrome last year and I’ve battled with holding in and supressing all the urges to shout things, which meant I was stopping and starting a lot when talking. I became really self-conscious about it and thought that people would think I’m just really bad at talking. But being able to go to Keith and talk through ideas before I entered into conversations with other people really helped me, because I was able to feel confident in what I was saying first, so I knew what I was talking about mattered.

“Having a mentor is like having an informal manager - there’s someone there to support you when you’re doing the right thing, but also to say, ‘reign it in, Matt, you’re going in completely the wrong direction - let’s get you back on track!’.”

Through becoming more confident in speaking, Mathew was also able to discuss Wandering Brian at networking events and pitch his project to potential funders, successfully scoring almost £20k of grants to develop the comic. It will be published in hard copy form this year, but Mathew is also looking at digitalising Wandering Brian, which will use software that enables dyslexic readers to tailor different elements, such as changing the size and colour of fonts, making the comic easier to read.

The funding has also enabled Mathew to take on a new team of illustrators, artists and writers, and the team is working on a completely new script for Wandering Brian’s release. Mathew is currently in talks with publishers on getting the comic distributed in various schools, businesses, and even as a learning tool in prisons. It’s a very busy time, and Mathew tells us what’s next for Wandering Brian:

“I don’t want to focus on Wandering Brian as a money-making machine, I’m doing this because I believe it will make a difference. The plan is to finish my Master’s and go into teaching, whilst continuing Wandering Brian on the side. I have funding for five issues, so now I’m focusing on getting everything in place for that. 2018 is the year of Wandering Brian’s release, and will hopefully be the year I actually meet Keith face to face too, so I can thank him in person for all of his help through this exciting journey.”

Keith’s background in commercial banking and his role as a Relationship Director has given him a lot of experience in dealing with SMEs, but although this helps him in his mentoring role in some respects, he has also found that putting aside his day job can be the key to being a good mentor. Keith says:

“My day job is all about exploring possibilities and offering solutions, so it’s important for me to put that process to one side - being a mentor is about helping your mentee to do that for themselves; to look at the options, explore possibilities, and then make informed decisions. It’s a very rewarding thing to be able to do, and you see how people’s confidence develops - the first time they have to make a big business decision may be challenging, but the next time a similar scenario comes along they’re already starting to come up with ideas on their own, so you really get to see how people grow. It’s almost my goal to make myself redundant after about a year - of course, there’s no harm in touching base and chatting things through, but I see being a mentor as a chance to help the mentee to develop to a point where they don’t actually need me there anymore.”

When Keith first met Mathew, he saw what an admirable project Wandering Brian was, but knew that Mathew needed to be able to access funding and support to enable the comic to evolve, and so he introduced Mathew to a business plan template. Keith says:

“There were so many elements that made Wandering Brian such an admirable endeavour, and although Mathew didn’t want it to be a money-spinner, he needed to be able to present it to the right people in order to secure funding, so we used a template to create a business plan - and it worked; Mathew secured £17k of funding for five issues of the comic, which is an incredible achievement. The funding has enabled him to take on staff, and now Wandering Brian is fully underway and due to be released this year.”

Another of the key areas Keith has helped Mathew with is looking at getting the comic digitalised, and Keith explains how playing with tailoring the different elements has helped him to get a first-hand understanding of its benefits:

“It’s really interesting stuff, and playing with some of the changeable elements showed me what works. For example, blue text is particularly challenging if you’re dyslexic, and so I changed the main page colour from blue to orange and black, and it’s amazing how something like that can make it so much easier to read, even if you don’t have dyslexia.”

The other main area Keith focused on with Mathew was communication, and says that Mathew has come on leaps and bounds over the last year:

“Mathew is a very intelligent and capable guy, but there was a barrier with communication. I’ve watched his confidence grow in this area with everything from email conversations where he’s cc’d me in, so I can see how he’s getting on, all the way to networking. Seeing this change is what makes mentoring matter to me. Being able to help somebody grow and make a difference to their business is why I do it. For me, being able to do this through my role at Lloyds is amazing - and it is genuinely worth so much more than a bonus at work ever could be.”