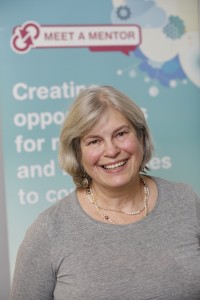 The IOEE’s member base is incredibly diverse, with people from all walks of life signed-up to enjoy the privilege, services and benefits associated with it. To let you know just how broad a spectrum of people we work with and what membership represents to them as individuals, we’ve created Spotlight on… which, every month, will introduce you to an IOEE member with an interesting story to tell. In the first of this new series, we talked to Affiliate IOEE Member Sharon Goodyer, a remarkable woman who wholeheartedly threw herself into entrepreneurial adventure following a long and successful career in education.

In 2000 Sharon was forced to leave education after 26 years because of Parkinson’s disease. However, she was fast to transform this negative experience into positive action:

“I’d had a very successful career in education and I was angry. Anger gives you energy, doesn’t it? The only other thing I could do was bake and cook so I set up a market stall in Kent making old-fashioned, long-life, proper sponge cakes.”

Incredibly, within three years Sharon’s market stall had a turnover of £5 million with national contracts and three shifts of employees working around the clock to manufacture 10,000 cakes a day. Sharon called her business The Cake Bake Company. Things were going splendidly in 2007 when one day she received a call asking her to provide 400 huge cakes for a certain Skoda Fabia TV advert. The now famous advert, in which a team of people transform a gigantic quantity of cake into a life-size replica of the new Skoda, really put The Cake Bake Company on the map:

“Every other bakery in the country had turned them down – even Jamie Oliver had said no! But I had just moved into a new factory, I had excess capacity and my default, because I had come from education was yes, whereas most people’s default is no. It was very challenging to do very quickly but it was great fun!”

Although the Skoda project broke up the monotony of factory life and temporarily brought some drama to baking, Sharon is keen to point out that it was the product that spelled business success:

“The thing that sold the cakes and built the business was that the product was absolutely right for that time. I’m good on process and I’m good on building teams so I can get the most out of them. The operation was slick and the overheads were low so I could turn a good product out at a good price.”

However, it was around this time that the recession’s full force began to be felt and suddenly Sharon’s product seemed at odds with the times.

“We weren’t making decorated cupcakes. They were adult products and research showed that during the recession adults were prepared to go without treats to make sure their children got theirs. In the food industry you don’t have a contract – the phone simply stops ringing.”

The Cake Bake Company very quickly became unbuyable, debt began to mount and the banks were unsympathetic to Sharon who feels she was given no time to organise and amend her business approach in line with events. There’s one key fact the entrepreneur regrets about this period:

“I think it would have been different if I had been an IOEE member at that time. I had a lack of support, a lack of time and a lack of reasonableness from the banks. I was an inexperienced business woman.”

Following the collapse of The Cake Bake Company, and having officially retired, in 2013 Sharon once again felt the entrepreneurial itch. Her new brainchild was Bar15 – a no added sugar cereal bar with 15 natural ingredients that has already been highly recommended as a new product.

“I became an IOEE member when I set up Bar15 because I didn’t want to go through the same business experience again. I received my start-up loan from SFEDI and joined the IOEE at the same time. I was very careful to get my loan from an organisation that was going to be involved and supportive of my business, keeping me aware of the bigger picture.”

So, what exactly does Sharon get from her IOEE membership that’s so important to her?

Aside from her own personal experiences of the IOEE, Sharon also feels that the organisation is changing the way the exchange of business support is perceived. She says:

“I believe the IOEE is responsible for changing the context of business support, by making it much more legitimate to give and to accept.”

Now 64, Sharon is someone with real insight into the challenges of being an older entrepreneur. There’s a lot of business support about that seems to be focused on younger people’s needs but, Sharon says, older people undertaking enterprising activities have a different set of requirements.

“So much enterprise support is aimed at younger people establishing businesses, getting a start-up loan, forecasting cash flow, building websites etc. I access and use all this support like a lot of retired people are doing nowadays but at our age, we’re probably not building businesses to sell.”

In fact, Sharon has very different plans for Bar15, as she explains:

“It’s a small, profitable food business. I have traded with integrity and honesty to build Bar15 up but I do have Parkinson’s disease and I can’t keep working forever. My consultant will be jubilant if I retire! What I would love to do is find one or two people who would like to take over the business with me supporting them to do so. Not for free, but for a very good offer.”

Sharon, no longer able to work at full speed and dedicate the time and energy small businesses demand, feels there’s another way to step down that doesn’t mean selling or simply closing her business. Right now, she’s on the look-out for the right person or people to take Bar15 forward into an exciting future:

“My love is facilitating for and enabling other people. I’m an educationalist through and through. It would be lovely if I could help someone else get started in business. A couple of youngsters who really care about diet and see the opportunities out there for a no added sugar, healthy product and a solid, honest business.”