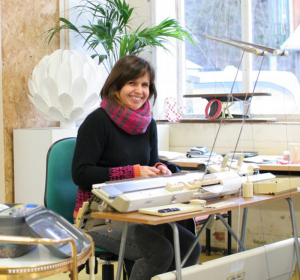 Nic Corrigan, pictured above, is a talented knitwear designer who founded her own company in 2014. After feeling conflicted about elements of her previous career in the fashion industry, Nic wanted to pursue something more fulfilling and ethically and environmentally conscious, creating Whitehall Studio in West Yorkshire. The IOEE paired Nic up with mentor Lisa Moore, a Senior Marketing Manager at Lloyds Banking Group, to help guide Nic in the throes of setting up a new business. This month we chatted to Nic and Lisa about their journey of facing fears, building confidence, and finding the right work-life balance.

Nic loved fashion and knitting from an early age. She has fond memories of making clothes for the school fashion show and can’t remember a time when she couldn’t knit, but she went on to pursue a more academic career before a niggling voice at the back of her mind told her she was missing something. Nic says:

“I decided to go back to university to study Fashion Design, graduating in 2007 and beginning my career working in the industry with a host of High Street retailers. And for those first few years it felt really glamorous; you’re jetting off to the Far East four times a year to visit factories producing your garments, and everything is fast-paced and exciting. But after the newness wore off and the financial crash hit, it all felt different. As a designer, you’re working for a supplier between a factory and a retailer, and everything had just become about pricing and cost rather than design and creativity.

“The fashion industry is a notoriously harsh environment and I grew increasingly worried about the cycle and pressures of oversees production, and it felt so far away from the creative process I had trained in. During those last couple of years of work, I didn’t necessarily believe in everything I was doing. When I got made redundant from my final position, I realised I felt disillusioned with that side of industry, and I didn’t want to look for any other similar jobs. So this was going to be my time to get back to the elements of fashion and design that I loved when I was at uni, and do something for myself.”

Nic created Whitehall Studio, a luxury knitwear brand in Hebden Bridge, where she produces her own garments and accessories. The company values quality materials, sustainability, craftsmanship and original design, and Nic’s work is flourishing in a business she really believes in. However, Nic says she that was lacking confidence in those early days, which is something that her mentor, Lisa, really helped her to find. Nic says:

“There are a hundred and one amazing benefits of having a mentor, but I think the biggest thing for me was the opportunity to get a fresh pair of eyes on the business, an outside perspective from someone who’s not involved, as it’s hard to see everything clearly when you’re in it. The fact that Lisa’s from a completely different industry is helpful, and she’ll explain the way they do things at her work, and you learn that the same principles are usually carried over, no matter what sector or industry you’re working in.

“We talk regularly, but meet in person every couple of months too, and I really value Lisa’s advice. She doesn’t tell me what to do, but asks me the right questions and then I’ll hear these big revelations! This is the hardest thing I’ve ever done, but Lisa’s been so supportive, and meeting up with her always boosts my confidence. I think there’s a natural progression from mentor to mentee too – you have that understanding of what you struggled with yourself, and I have so much goodwill for the people who’ve helped me along the way that I now want to pass that on to other artists who are starting out, and encourage and help them to succeed. I’ve recently launched a shop alongside the studio. It’s early days, but this is one way of being able to support artists and the local community.”

When Lisa was first introduced to Nic, she saw there were two main areas that were holding Nic back – confidence and that elusive work-life balance. Lisa says:

“When I first met Nic she was working non-stop, knitting all of her garments at home, selling through Etsy and at local fairs, and was trying to promote herself that way – basically trying to do everything all at once! The first thing I encouraged her to do was to separate work and home, as they were both blurring into one chaotic time, which can be overwhelming. I encouraged her to reach out to an art venue to chat about possibility of renting a desk with them, so she could separate that time to be creative from her home life, and I think that discipline of setting boundaries was really helpful for Nic.”

Lisa says that Nic’s biggest challenge was her confidence, and that Nic had a lot of self-doubt about her abilities and the turnaround time for her garments, but one negative experience actually turned into a positive experience, that helped to give Nic the confidence boost she needed. Lisa says:

“A wool and knitwear company got in touch with Nic, wanting to give her some of their yarn, and asked her to knit three unique pieces for them to take to international fairs. Nic was amazing and did it all and took pieces to the company – who told her they weren’t right for them or what they were expecting. This really knocked Nic’s confidence and she came away quite bruised, feeling like there wasn’t much point in pursuing this any more. But I said to her, ‘you’ve told me for ages that you haven’t had time to knit, and here you’ve designed and knitted three jumpers from scratch in a week!’. Something clicked then. It was a negative experience, but it showed Nic that, actually, she absolutely could do this.”

Lisa would set Nic challenges, such as hanging up one of her new jumper designs at a fair to get feedback from people - “she would do this very begrudgingly, scared that people would judge her, but everyone just said how lovely they were!” - and Nic slowly but surely began to overcome the fear that was holding her back, even expanding Whitehall Studio to add another element to the business. Lisa says:

“We were starting one mentoring session and Nic suddenly said she was going to open a shop – I was like, where did that come from?! It’s only just launched, but it’s selling some of Nic’s designs, but also those from other local artists and designers that she likes, so she can showcase their work and support them too. It’s really all come together, there’s been a whole transformation and it’s so lovely to see – she’s even hanging up garments on a railing in the shop to show prototypes and her work in progress so she can get feedback. It all came down to confidence, no one was pushing her. The next part of the journey is going to be really interesting for Nic – she’ll still be the lovely and wonderful lovely person that she is, but I think she’s got a more shrewd business head on her shoulders now.”

Lisa’s day job with Lloyds Banking Group is busy and fast-paced, and she tells us how she manages to include mentoring in her already full working life:

“Some days I think, ‘oh, I haven’t got time for anything’, but every time I go and talk to Nic I feel better and more inspired, like I’ve really accomplished something. Mentoring gives you a chance to break away from that familiar day job into new territory and share your value, and it’s so rewarding. I’d encourage anybody to go and do this, because you don’t have to be an expert in somebody else’s business to help them, you have more to bring to the table than you realise, and I’m definitely planning to do more.”

To find out more about Whitehall Studio, please visit the website www.whitehallstudio.co.uk/my-story/